Director Paul Feig was aiming for a good laugh and they fairly achieved it. The film seems like a prequel to the former one, but has its own original take on the story.

Melissa McCarthy has let the ensemble cast take centre stage and provided her share of laughs. Kristen Wiig is uptight yet adventurous, Kate McKinnon is whacky and eccentric and Leslie Jones is brave and feisty. The surprise package is Chris Hemsworth who successfully plays blonde but charms in the end.

A fun flick which doesn’t take itself seriously. Watch till the end credits finish for the complete experience 👻

All I knew about this film before walking in to the cinema was ‘Melissa McCarthy’ and that was enough. Throw in the director of ‘bridesmaids’ and ‘the heat’, Paul Fieg, and you have yourself a recipe of non-stop, unexpected humour!

Comedy meets action meets insanity in this laugh riot, which combines the cool, suave, spy world with a single woman who keeps getting into stereo types in order to do her job. She encounters an ex-colleague, Jason Statham, who won’t leave her alone, her gal pal and co- worker, Miranda Hart who brings much needed British wit on the table.

The villains though merciless are goofy in their own way, Bobby Cannavale and Rose Byrne are silly caricatures. There’s Jude Law for a bit and Nargis Fakhri for a tiny bit. They provide the glamour quotient.

Actors have experimented with various accents to portray different nationalities. All done in good humour, there is a constant sexual tension with an agenda to entertain, which it does till the end.

A good laugh and a fun chase.

bleep **** blank %$£@ beep. Nothing could prepare me for the profane riot that this film was! Either catch that thread and keep rolling in your seat, sometimes out of it, clapping away at the scandalous nature of the sense of humour, or sit quietly and wonder why the moron behind you is going crazy.

After her few scenes in Hangover 3 as Cassie (yes that was her), Melissa McCarthy shocks, entertains and keeps surprising us as Mullins in this ‘Chalk has to work with Cheese’ Crime Comedy. In this instance the chalk was Sandra Bullock, and these two ‘poles apart’ personalities had to work together to solve a drug scam.

Their chemistry and compromise make the film so unique, while the writing and choice of profanity was genius. Yes, it takes brains to string a limited vocabulary to make you laugh, again and again and again!

It is an R-rated film, and rightly so! Please watch it where the content is not ‘bleeped’ out, otherwise its no fun. 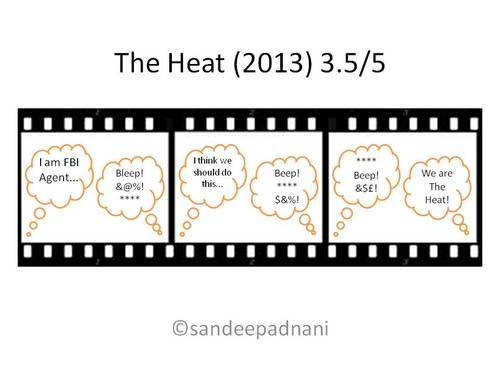